Imperial rounds are the traditional British rounds, shot at distances measured in yards. The “5-zone” scoring system dates back almost 200 years, being attributed to the then Prince Regent (later King George IV) – traditionalists still refer to “the Prince’s colours” and “the Prince’s reckoning”. Arrows in the gold score 9; reds score 7, blue 5; black 3; and white 1. Any misses (including arrows that hit the target but lie outside the scoring zones) are recorded as an “M”, and score zero.

Metric rounds are those internationally recognized by World Archery (previously FITA), and are shot at distances measured in metres. Like indoor rounds, they use “10-zone” scoring, where each colour is divided into an inner and an outer zone (for example, inner blue is 6, while outer blue is 5). Again, misses are “M”s.

In addition, not only is there an inner gold (the 10), but inside that is a smaller “inner 10” or “X” ring. Arrows landing there are recorded on the score card as an “X”.  [This is no longer a “compound 10”: both recurve and compound archers score their arrows in the same way. It is also different to the scoring systems used indoors (where there are no X’s, just 10s and 9s).]

Adding it all up

When you come to add things up, Xs score ten points, and (in case of ties) count as both 10s and Xs.

The diagram below illustrates all of the above: 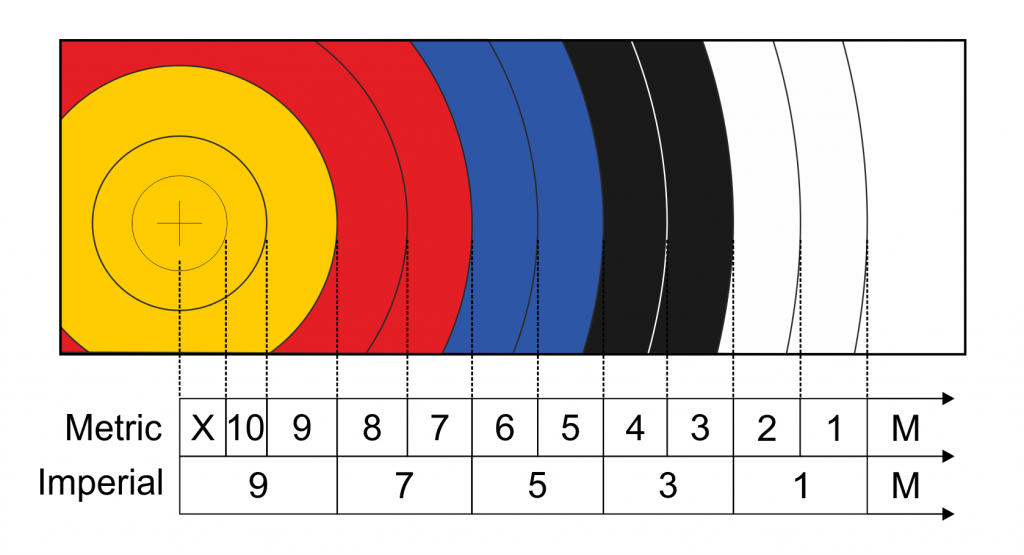 A word about “line cutters”: If an arrow shaft straddles two scoring zones, it scores the higher value. The dividing lines between the scoring zones are defined to be entirely within the higher one – so if an arrow as much as touches the line, it’s in. (If you can’t see any colour between the line and the arrow, that’s good enough. On a damaged or deformed target face, imagine where the line would be were it intact.) If the people on your target can’t agree, call the judge for a final ruling.

[Note that – despite what it might look like – there isn’t a dividing line between blue and black zones. In this case your arrow actually has to touch the blue.]

A Final Word on Scoring

Remember – if you touch an arrow, or the target face, before you’ve finished scoring, it scores the lower one.

[Extracted from the Bromyard Bowmen Newsletter]

We use cookies on our website to give you the most relevant experience by remembering your preferences and repeat visits. By clicking “Accept All”, you consent to the use of ALL the cookies. However, you may visit "Cookie Settings" to provide a controlled consent.
Cookie SettingsAccept All
Manage consent

This website uses cookies to improve your experience while you navigate through the website. Out of these, the cookies that are categorized as necessary are stored on your browser as they are essential for the working of basic functionalities of the website. We also use third-party cookies that help us analyze and understand how you use this website. These cookies will be stored in your browser only with your consent. You also have the option to opt-out of these cookies. But opting out of some of these cookies may affect your browsing experience.
Necessary Always Enabled
Necessary cookies are absolutely essential for the website to function properly. These cookies ensure basic functionalities and security features of the website, anonymously.
Functional
Functional cookies help to perform certain functionalities like sharing the content of the website on social media platforms, collect feedbacks, and other third-party features.
Performance
Performance cookies are used to understand and analyze the key performance indexes of the website which helps in delivering a better user experience for the visitors.
Analytics
Analytical cookies are used to understand how visitors interact with the website. These cookies help provide information on metrics the number of visitors, bounce rate, traffic source, etc.
Advertisement
Advertisement cookies are used to provide visitors with relevant ads and marketing campaigns. These cookies track visitors across websites and collect information to provide customized ads.
Others
Other uncategorized cookies are those that are being analyzed and have not been classified into a category as yet.
SAVE & ACCEPT